With the aim of promoting the sound development of China’s offshore wind industry, Chinese Renewable Energy Industries Association (CREIA), Global Wind Energy Council (GWEC) and Shanghai International Exhibition Co., Ltd (SIEC), a subsidiary of China Council for the Promotion of International Trade, Shanghai Sub-council once again join forces to build Asia’s first professional platform focused on the offshore wind power market — “Offshore Wind China 2010” — which will be held from June 7-9, 2010 in Shanghai. The conference is expected to attract at least 600 conference delegates and the exhibition space is to reach 10,000 sq.m.

In the context of this market, many wind power companies are trying to occupy more of the market share. Mr. Liang Hanjun, president of Sinovel Wind Group Co., Ltd said, “As the explorers and pioneers of offshore wind, we will fully support this event.” Ms. Cheng Hong, Directory Government Relations of Vestas Wind Technology (China) Co, Ltd, also said, “We are very honored to participate again and will give top priority to this event.” Mr. Qi Xinping, president of Shanghai Electric Windpower Equipment Co., Ltd, believed that Offshore Wind China 2010 will provide a good platform for them to promote their own debut 3.6MW sea fans.

Besides, another two important events in spring and summer in 2010 will contribute to Chinese and Norwegian co-operation in offshore wind. Mr. Tormod C. Endresen, Consul General of Royal Norwegian Consulate General Guangzhou, said, “I applaud China’s determination to develop new energy sources. I hope it will help them to excavate the potential energy of the development of offshore wind. As the overseas co-organizer of Offshore Wind China 2010, Royal Norwegian Consulate General Guangzhou and Innovation Norway will set up a national pavilion to introduce new products, technologies and innovation in offshore wind.”

Offshore Wind China is the first conference and exhibition focused on “offshore” wind together with its supply chain in China and even Asia. Although there are other comprehensive wind power events in China with one session of offshore wind, what makes us unique is our exploration deep into the offshore industry, covering a much wider range.

Almost all the leading enterprises engaged in offshore wind power at home and abroad, such as Vestas, Sinovel Wind, Shanghai Electric, CSIC, Aantis and Guodian United Power, have confirmed their appearance at this exhibition. During the event, they will hold press conferences, organize receptions for key customers, as well as generously and comprehensively present their latest technologies and products at the exhibition site. Recently, the organizers learned that Vestas’ senior leadership will personally lead a delegation to participate in this event, while Sinovel Wind’s Chairman, Han Junliang, has also given it high priority and will be organizing many different kinds of events in conjunction with the exhibition. At the same time, complete machine manufacturers will also jointly build an offshore wind power industry chain with their original equipment suppliers. Locations of major wind power industrial parks in China, such as Tianjin and Jiangsu, will be organizing groups of small- and medium-sized component enterprises to actively participate in this event.

Offshore Wind China has won great support from many governmental organizations both at home and aboard. At the national level, there is the National Energy Administration, Chinese Renewable Energy Industries Association. At the local and provincial level, there is the Shanghai Municipal Development and Reform Commission, Shanghai Municipal Economic and Informatization Commission, and four Development and Reform Commissions of Jiangsu, Zhejiang, Shandong and Fujian. Meanwhile at the international level, there is the Global Wind Energy Council, Royal Norwegian Consulate General Guangzhou, Denmark Export Association, American Wind Association, etc. All the above organizations’ high-rank officials will be present during our event.

In terms of exhibition, the developed offshore wind countries and regions have attached great importance to Offshore Wind China. There will be national pavilions of Norway and Denmark.

In terms of conference, the invited speakers by now have exceeded 100, which is twice as many as last year, and the overseas percentage has gone beyond 40%, hailing from Denmark, Norway, UK, America, Germany, Austria, Japan, Belgium, Canada, etc.

4. Ideal interaction between exhibition and conference

Offshore wind is a sector with vision and high technology. Currently, some enterprises have been involved in this field, while others are keeping close attention to it, trying to find the best time to enter. Therefore, the conjunction of exhibition and conference will be a good platform where the key wind turbine manufacturers and its supplier will gather to meet, and where more new-comers can come to learn about the market. This is an ideal opportunity for enterprises either engaged in or interested in the market to find a good entry point.

High qualified talent and great management systems are very important to the development of offshore wind. The Chinese market is just starting, and many problems exist such as the shortage of management systems and professional staff especially in R&D, manufacturing, high skills, operating, maintenance and administration, let alone comprehensive human resources. Therefore, a special job fair area for the wind power industry is set up on site. We will invite more than 30 representatives from HR departments of exhibitors and training institutions in order to offer more professional consulting and career planning to the visitors.

The event will be held at the same time with World Expo 2010 which allows us to share with visitors from home and aboard. There will be San Marino Day on June 4, Kazakhstan Day on June 5, Portuguese Day on June 6, Australia Day on June 8, Philippines Day on June 9, and Japan Day on June 12.

To be noted: in the spring of 2010 there will be two important events on the wind power agenda linking China and Norway as potential future partners in developing offshore wind parks. Mr. Tormod Enders, the consul general of Royal Norwegian Consulate General Guangzhou, said,” I appreciate very much China’s resolution to vigorously develop new energy. I hope this will help to promote the exploration of the offshore wind market.” The first of these events is a seminar in Bergen, Norway, March 15-16, and the second is Offshore Wind China in June. As the overseas co-organizer of the event, Royal Norwegian Consulate General Guangzhou and Innovation Norway will invite speakers to deliver speeches at the conference to introduce its rich experiences on offshore wind, and meanwhile they will set up a National pavilion to present the cutting-edge products and innovations.

The organizers are committed to offering considerable, convenient and comfortable services to each of the participants based on rich event organization experience and successful records from the past two years.

Finally, we’d like to express sincere gratitude for the participation of all offshore wind leading companies and main suppliers. Special thanks also go to the governments and industry organizations who have given us great support. We are looking forward to seeing you at Offshore Wind China 2010. 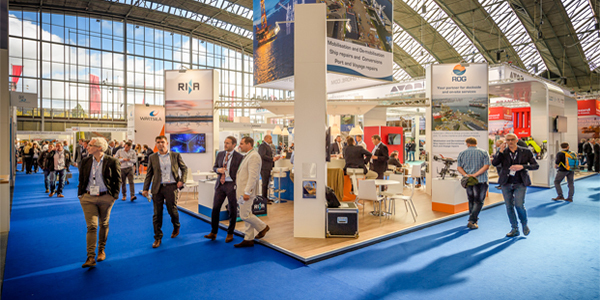