What’s next for offshore wind?

One of the biggest stories in the wind industry over the past few years has been the impressive growth of offshore wind - and it is showing no sign of slowing down any time soon. Where and how is this growth happening? What needs to be done to unlock the full potential for this emerging technology? The Global Wind Energy Council’s Alastair Dutton provides a global snapshot of the trajectory for offshore wind and why more and more countries are looking offshore.

Offshore wind has been a hot topic over the past few years, and it is no surprise why. The International Energy Agency expects that offshore wind will be a $1 trillion industry by 2040, with offshore wind capacity forecasted to grow to 1 TW by 2050 according to IRENA. It is therefore an increasingly important piece of the energy transition puzzle to reduce carbon emissions and fulfil our climate goals.

Europe has been leading this charge, with countries such as the UK, Germany, Netherlands, Denmark and Belgium putting in place offshore wind targets and the government support to realise these targets. France, Sweden, Ireland, Turkey and Poland as well as potentially Estonia, Latvia and Lithuania are all now setting their sights on offshore wind. WindEurope has called for 450 GW of offshore wind by 2050 in Europe, a goal which is technically achievable if the industry and government work together to put in place the right policy mechanisms.

Yet, Europe is only one region where offshore has massive potential to contribute to the energy transition, with more and more countries looking to take advantage of this cost-competitive and powerful energy source. According to a recent World Bank Group report, there is over 3 TW of technical potential for offshore wind in just eight developing countries. It is thus crucial that we look globally into new emerging markets if the full potential of offshore wind is to be untapped.
Since 2018, China has been leading the world in annual build rate – going from less than 1 GW in 2015 to a forecasted 12 GW in 2020 and 60 GW by 2030. We will see a massive installation rush over the next two years as the Feed-in-Tariff will expire in 2021 and offshore projects will be subsidy-free.

Another major offshore leader emerging from Asia is Taiwan, who inaugurated its first offshore wind farm of 128 MW at Formosa 1 in 2019. With a current target of 5.5 GW offshore capacity by 2025, the government has raised its ambitions further announcing in October 2019 an additional 10 GW by 2035. This government ambition has brought in millions in investments for local industry and created thousands of jobs, and now other countries in the region such as Japan, South Korea, Vietnam and India are looking to build an offshore market of their own to also see these significant benefits.

Looking now to the other side of the world, the United States are also pioneers for offshore wind, with 25 GW of projects in development. On the East Coast, we are seeing fixed foundations being rolled out while in the deeper waters on the West Coast, floating foundations is the technology of choice.

Speaking of floating offshore wind, we expect to see floating technologies reaching commercial scale in various markets around the world over the next decade. As these projects get deployed, costs will fall possibly similar to levels of fixed foundation. This exciting opportunity would increase deployment potential by a factor of four, thereby opening even more markets for offshore where fixed foundations are simply not viable.

As offshore wind continues to grow, the power grids will need to adapt in order to take full advantage of this technology. Innovation in storage and alternative production, such as green hydrogen and desalinated water, are solutions that can decrease pressure on power grids while ensuring that each turbine is maximising its power production potential.

Given the impressive growth and innovation that we have seen so far in the offshore wind industry, we are confident that these challenges can be overcome and that we will be seeing more and more offshore turbines in oceans across the world. 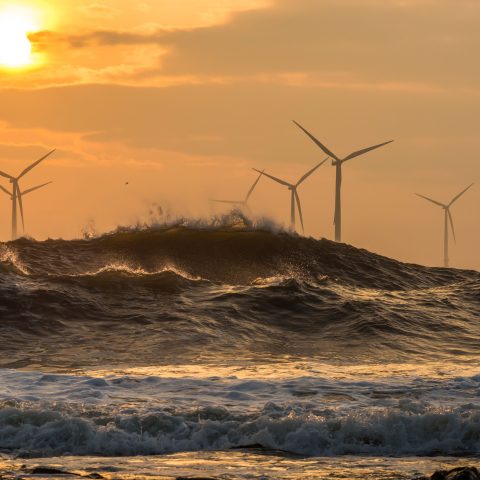