Danish transmission system operator (TSO) Energinet and Gasunie Deutschland have signed a Memorandum of Understanding (MoU) to work on the preparations for cross-border hydrogen infrastructure between Denmark and Germany, which will accelerate the preparatory work and put the countries’ green hydrogen ambitions on path to realisation by 2030.

Under the MoU, the two parties will take a coordinated approach toward network development planning based on the results of a prefeasibility-study that Energinet and Gasunie Deutschland conducted last year, and taking into account the latest market developments in both supply and demand.

In 2021, the companies performed a techno-economic pre-feasibility-study that showed Denmark could potentially supply 10-25 per cent of the future German hydrogen demand through a pipeline the Danish and German Governments included in their Letter of Intent (LoI) on strengthened collaboration on green hydrogen in May 2022.

The LoI was signed in conjunction with the Esbjerg Declaration through which Germany, Denmark, Belgium, and the Netherlands set a joint target to deliver at least 65 GW of offshore wind by 2030 and to increase that capacity to at least 150 GW by 2050.

“Hydrogen infrastructure enables us to fully utilize and export some of the vast renewable energy resources in Denmark and to deliver on the Esbjerg declaration. In Energinet we already sense a strong market interest in being able to supply the German hydrogen market with green hydrogen produced in Denmark – and the ambition is to realize this before 2030”, said Søren Dupont Kristensen, CEO of Energinet.

“A lot must fall in place before then, so I am very happy that we are now committed to speed up the preparatory efforts and through that support the European energy security”.

Since the Esbjerg Declaration and the LoI between Denmark and Germany were signed, ambitious political agreements on Power-to-X and massive buildout of renewable energy have been reached in the Danish Parliament. Consequently, Energinet has launched a study that investigates the feasibility of a “hydrogen backbone” in the western part of Denmark including infrastructure for exports to Germany, according to the Danish TSO.

It is expected that large parts of the ”hydrogen backbone” between the two countries could be based on converting existing gas transmission pipelines.

“The strategic value of intensified hydrogen cooperation between Denmark and Germany lies in the well-developed, high-performance infrastructure that already connects the two neighboring countries. This gives us direct access to Danish green hydrogen sources – without conversion to intermediate energy carriers such as ammonia”, said Gasunie Deutschland CEO Jens Schumann.

Under their newly signed MoU, Energinet and Gasunie will also analyse and outline the crucial decision gates on the way toward reaching final investment decisions.

The MoU signed by the two companies further build the collaboration between Denmark and Germany, which entered into two new political agreements over the past few days.

On 29 August, ahead of the Baltic Sea Energy Security Summit, the two countries agreed on connecting the Bornholm Energy Island to Germany to enable the offshore wind power at this Danish energy island to be sent directly to the German electricity grid and on to the rest of Europe.

The Bornholm Energy Island, due to be completed in 2030, will comprise 3 GW of offshore wind capacity and Power-to-X capabilities, such as green hydrogen production from offshore wind.

The following day, on 30 August, Danish and German prime ministers and energy ministers met at the Baltic Sea Energy Security Summit, together with their counterparts from Sweden, Finland, Poland, Latvia, Lithuania and Estonia.

The Marienborg Declaration sets the overall vision of how to strengthen national and European independence from Russian energy and boost the green transition. In the document, the countries’ leaders have committed to a combined ambition for offshore wind in the Baltic Sea region of at least 19.6 GW by 2030 – a sevenfold increase compared to the current 2.8 GW.

In the Declaration of Energy Ministers, the energy leaders from the Baltics have agreed on how to get the countries’ electricity grids more closely connected with the continental European network through joint cross-border hybrid projects, such as energy islands.

The energy ministers will also work on strengthening political cooperation on energy security and deployment of renewable energy within the existing framework of the Baltic Energy Market Interconnection Plan (BEMIP), whose purpose is to create an open and integrated regional electricity and gas market between the EU countries in the Baltic Sea region. 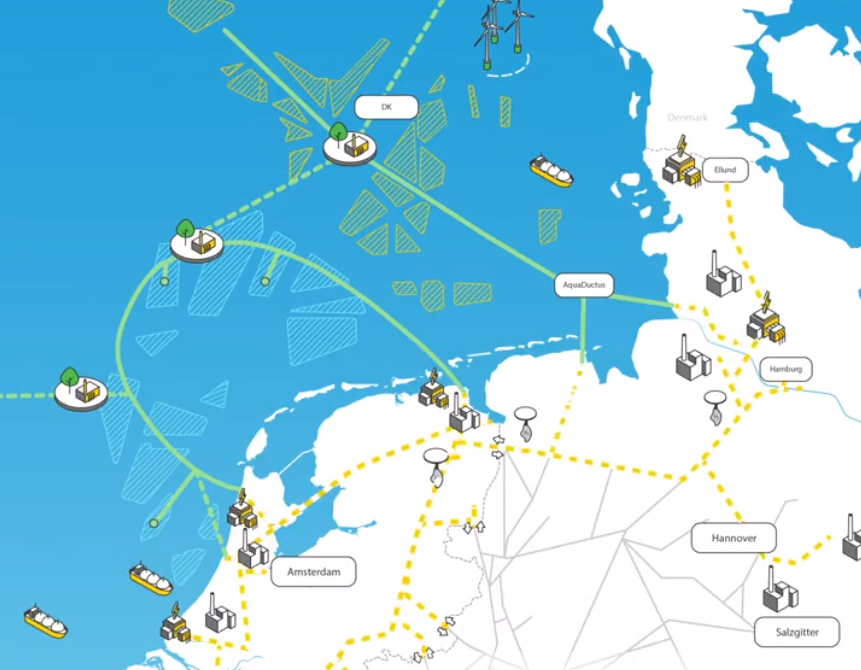