Janet Mills, the Governor of the US State of Maine, has signed into law LD 1619 which prohibits new offshore wind projects in State waters.

The prohibition is said to preserve Maine’s State waters for recreation and fishing, where up to 75 per cent of Maine’s commercial lobster harvesting occurs, and cement into law Maine’s priority of locating offshore wind projects in Federal waters in the Gulf of Maine.

The new law is said to stem from extensive discussions among the Governor’s Energy Office (GEO) and Department of Marine Resources with fishing, wildlife, and environmental organizations.

”Maine is uniquely prepared to grow a strong offshore wind industry, create good-paying trades and technology jobs around the state, and reduce our crippling dependence on harmful fossil fuels. This legislation cements in law our belief that these efforts should occur in Federal waters farther off our coast through a research array that can help us establish the best way for Maine to embrace the vast economic and environmental benefits of offshore wind,” said Governor Mills.

The new law comes after Governor Mills last month signed into law another bill, LD 336, which advances the State’s creation of the nation’s first research area for floating offshore wind in Federal waters of the Gulf of Maine.

The State is proposing a smaller-scale research array, which will contain up to 12 turbines, that plans to use innovative floating platform technology developed by University of Maine and a public-private partnership with New England Aqua Ventus, a joint venture of two leading global offshore wind companies, Diamond RWE and Mitsubishi.

Under LD 336, the Maine Public Utilities Commission is authorized to negotiate a contract with a transmission and distribution utility to purchase up to 144 MW of energy from the proposed floating offshore wind research array in the Gulf of Maine.

In the coming days, the Governor’s Energy Office (GEO) will also identify a preferred site for the research array, in advance of submitting a formal application for the area to the federal Bureau of Ocean Energy Management (BOEM) later this summer.

Since December, GEO has held a series of public meetings to solicit information about potential array site, which is generally targeted for 20-40 miles from the Maine coast in an proximate area to allow for connection to the mainland electrical grid at Wyman Station in Yarmouth or Maine Yankee in Wiscasset.

The GEO, in consultation with other agencies, is now reviewing all data collected to inform the siting of the research array, with an emphasis on identifying a location with the least potential known conflicts with fishing, wildlife, and other ocean activity.

The GEO is planning a virtual public meeting on 13 July about the siting of the array and will accept feedback on the proposed site selection before finalizing an application to BOEM for a research lease.

Under LD 1619, a research consortium comprised of experts in offshore wind, Maine’s fishing industry, and the marine environment, will be established by the state to oversee and coordinate the array’s research efforts.

The GEO will also hold a virtual meeting on 14 July to start the public process to develop an Offshore Wind Roadmap for Maine, a strategic plan for developing an offshore wind industry in the state.

Supported by a USD 2.16 million grant from the U.S. Economic Development Agency, the Roadmap will be led by an Advisory Committee co-chaired by Ret. Admiral Gregory Johnson and Dan Burgess, Director of the Governor’s Energy Office.

Work on the Roadmap will be supported by expert working groups on energy markets, ports, workforce, marine transportation, supply chains, fisheries, and wildlife as it relates to offshore wind. The Roadmap is expected to be completed by the end of 2022. 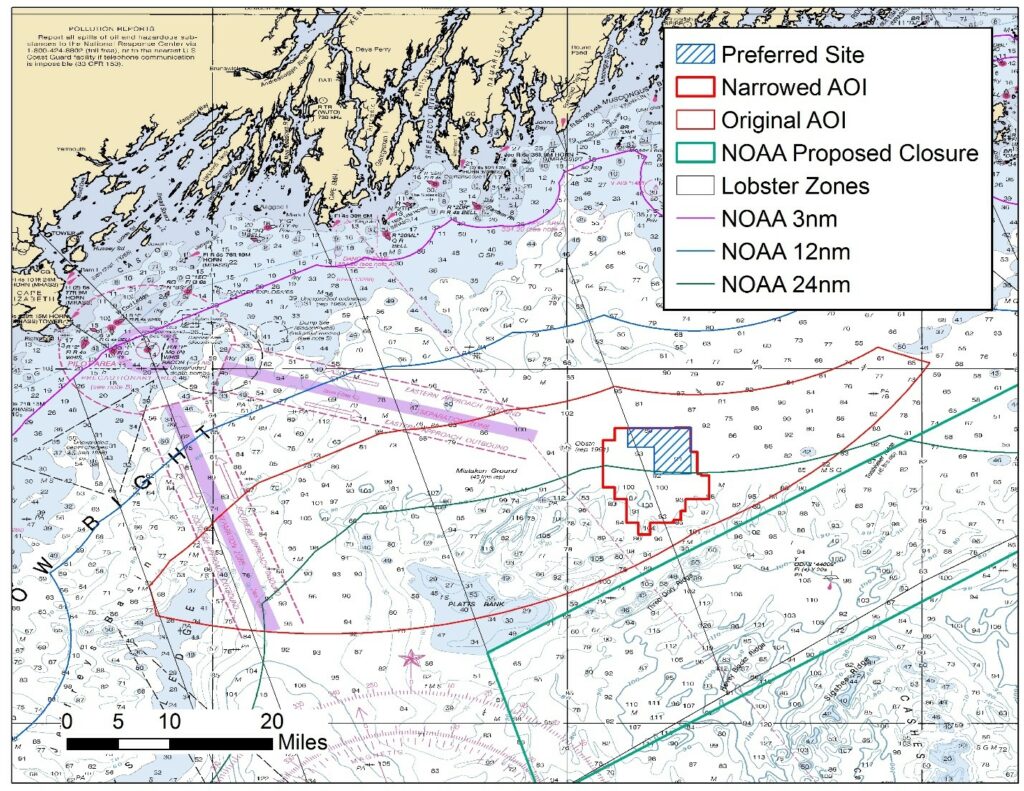