The future operator of the Hollandse Kust (zuid) III and IV wind farms will not be exempt from paying the seabed lease fee for the portions of the wind farms situated within the 12-mile zone of the Dutch territories in the North Sea, according to Eric Wiebes, the country’s Minister of Economic Affairs and Climate Policy.

Responding to the questions posed by the House of Representatives with regards to the industry’s opposition to paying the seabed lease, Wiebes said that the ministry expects the coming tender to attract sufficient interest from potential developers of the wind farms despite the additional costs, and that the tender will include zero-subsidy bids.

Wiebes also added that the potential request for seabed lease exemption filed with the European Commission would delay the tendering procedure, scheduled for March 2019. This, in turn, would affect the country’s offshore wind rollout timeline, Wiebes said.

The Hollandse Kust (zuid) III and IV tender comprises two wind farms with an individual capacity of between 342MW and 380MW. 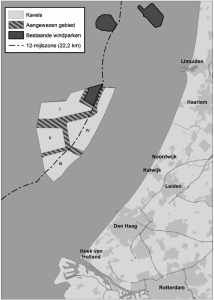 Approximately 70% of Hollandse Kust (Zuid) III & IV wind farm sites are located within the 12-mile zone of the Dutch territories. This means a seabed lease has to be established between the wind farm operator and The Central Government Real Estate Agency. Apart from the seabed lease for the wind turbines, a rental agreement for the infield cabling between the wind turbines and the TenneT platform has to be signed.

The Central Government Real Estate Agency has calculated the cost for the right to the seabed lease at these sites, based on a rate of EUR 0.98 per MWh every year, using a fixed total capacity of 350MW and 4,000 full load hours. The payment is fixed and independent of the final actual installed capacity or output from the wind farms and is only required for the part of the wind farm within the 12 miles zone. For HKZ site III this is 71.85% and for HKZ site IV is 68.23%. These annual payments will be required four years after the permits have become irrevocable and will be indexed for the period of operation.

Additionally, from the moment the permits are given to the winner up to the moment of the payment of the right of superficies seabed lease, a fee of EUR 650 per MW per year has to be paid for the parts of the sites within the 12-mile zone. These payments (indexation) will also be required for the period from when the wind farm ceases operation until it has been fully decommissioned and removed.