The first segments for the BLUE Hammer by Fistuca BV, which Sif is manufacturing in collaboration with Huisman, are ready at Sif’s Maasvlakte 2 facility.

The hammer will be the world’s largest pile-driver hammer, being specially designed to drive the largest monopiles in the world.

BLUE uses a gas mixture that is combusted to propel a column of water upwards. The column of water pushes the pole down as it shoots up and drives the monopile further into the sea floor as it falls back down.

BLUE Hammers are said to deliver high energy levels which increase the set per blow and boost pile driving speed by up to 70 percent, according to Fistuca.

The pile-driving technology produces much lower noise levels than conventional pile-driving and also minimizes fatigue to the foundation, Sif said.

Underwater noise levels are reduced by approximately 20 dB, and the pile driving fatigue is reduced by 85 to 98 percent, Fistuca said.

These results are expected to lead to a direct reduction to the costs of installing wind turbines, according to Sif. 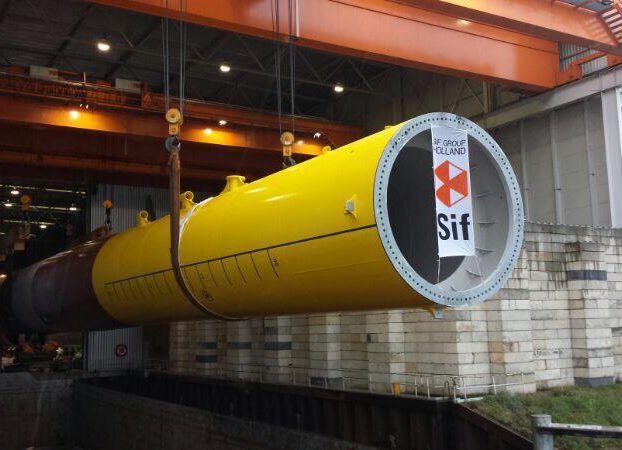