Financing wind farms: How the largest project finance in offshore wind was established

On May 14, 2014 the Dutch Gemini project reached financial close. After days and nights of intensive talks, serious negotiations and meticulously reviewing all contracts, all parties reached an agreement. All the ends were tied together, and everyone looked with satisfaction into a large room that was literally stuffed with contracts. Agreements, which made it possible to build a project with a value of 2.8 billion euros.

More than 22 parties were directly involved in the signing of the financing agreements, including 12 commercial lenders, four public financing institutions, plus a pension fund on one side and Northland Power Inc., as subordinated lenders, and the four members of the consortium assets. About 70% of this budget, approximately €2.1 billion, is provided on the basis of project financing, making Gemini the largest project-financed offshore wind farm.

“Financial close was a huge milestone for Gemini,” said John Brace, CEO of lead investor Northland Power Inc., “This is the largest project, so funded, that has ever occurred in the offshore wind energy sector. Today’s results demonstrate the quality of the project and the confidence of the financial community.”

“This confidence is due to the solid structure of the project, which was initially based on the support of the Dutch SDE program, and secondly to the supply agreements for the turbines and maintenance contracts signed with Siemens and construction agreement for the project with Van Oord. All this makes this project a stable and reliable investment opportunity. We are very pleased with the extraordinary efforts of the project funders – the funding was arranged in record time, especially unusual for a project of this magnitude.”

The first thing you notice about Gemini is the sheer scale of this project. Gemini is one of the largest offshore wind farms in the world. Within the Dutch context that becomes even clearer: the installed capacity is five times larger than the largest Dutch offshore wind farm until now, Prinses Amaliawindpark, and more than four times larger than the latest park being built, Luchterduinen.

In addition to the size also the distance from the coast is striking. Gemini is so far away that it is not visible from the shore. It lies 55km above the isle of Schiermonnikoog, that distance is more than twice as far as other Dutch offshore wind farms.

The magnitude of the project is exemplified by the enormous lengths of the export cables. The two export cables that connect Gemini to Eemshaven are over lOOkms long making them some of the longest export cables planned in the industry.

The size, the distance and the rough area where Gemini is built all provide additional challenges for the logistics concerned. Egmond aan Zee wind farm can be reached within an hour by fast support vessel, at Gemini a round trip lasts one day – if the weather permits. So you cannot just get men and spare parts out to the wind farm quickly by sea at all times in unforeseen circumstances.

Non recourse project finance key to development of offshore wind projects The Gemini project stands out from the crowd, not only because of the technical aspects of wind farms at sea, but also by the way in which it is financed. Renowned electricity companies that finance wind farms do this based on their balance sheet. A strong balance sheet gives the providers of loan capital more assurance that their investment is safe.

This method of financing however is not sustainable. As the investments required in renewable energy become larger, the opportunities to finance them via the balance sheet become more and more limited. Many utilities now today do not have such a strong balance sheet anymore. Therefore, increasingly these enormous investments must be financed on a project basis.

Gemini is financed on a non-recourse basis, and is considered a “soft-mini perm”, meaning there is provision to refinance within a certain period of time. If the project is not refinanced, then a certain level of cash sweep for lenders begins. This allows the lenders to have a shorter tenor of loan and also meet the criteria of tenor for the ECAs. Such an approach opens the door to more commercial banks, who are restricted on tenor, allowing greater participation and ultimately, success, which all fits well for very large renewables projects.

This also means that the lender has no guarantee other than the project itself. All interest and refunds have to come from the project itself. As a result, high demands are made to the developer. He must de-risk the project, provide a clear insight, good management and ensure that the investment will pay off. De-risking is one of the most important critical success factors in offshore wind finance.

De-risking makes projects like Gemini ‘bankable’, and can only happen if the project is technically well put together and financially transparent for all parties. The technical design of Gemini has been fully re-developed from its original design by previous owners BARD Engineering, which resulted in a technically optimal design, with high delivery reliability and optimum performance of the installed capacity. Obtaining the necessary changes to the licenses was technically an important milestone.

The final step was obviously the realisation of the required financing. In November an information meeting was held for the banks. With the offshore wind industry still being relatively unknown to the financing world and not entirely spotless when it comes to delivering in time and within budget it is important to provide a proper contractual structure with sufficient mitigants, reserves and equity which could see the hurdles diminished or even demolished.

In December the level of enrolment had been substantially oversubscribed. It even attracted a number of financial institutions that had not previously lent to the offshore wind sector. With more than 22 parties involved this takes good coordination between all parties. But by only a few months later in May, all agreements had been signed, reflecting the commitment for both the lenders and the borrowers to meet the target date. The period between the initial permit and financial close was less than five years.

Gemini is a mega-wind farm, which has been completely developed by independent experts, on the basis of a proper arrangement with the government. It shows that it is possible to develop, finance and build a large wind farm quickly.

The Netherlands can now select to realise offshore wind farms in a much faster pace, with the Gemini project serving as an example. There is more space far from the coastline where offshore wind farms with a guaranteed high yield can be built. The ‘Gemini approach’ may serve as an example that shows rapid realisation of wind farms is possible. The Dutch society, developers, industry, and marine contractors are ready for it.

Financial Close officially marks the transition from the development phase to the construction phase. In reality, the actual construction had already begun. Matthias Haag, CEO of Gemini: “We have assembled a team consisting of experts in the field of offshore wind energy, and we work closely with Northland Power and the consortium partners Van Oord, Siemens and HVC to ensure that offshore wind energy will play an important role in the Dutch electricity supply.” 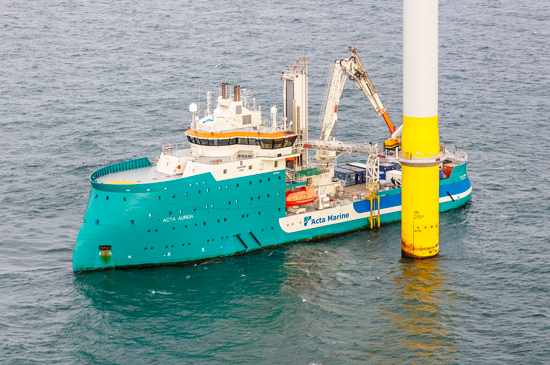