Mr. Chuanwei Zhang, Chairman and CEO of Ming Yang, commented on the first quarter results, “The growth of China’s wind power industry is slowing down with a more stringent project approval process, a step in the evolution of the industry. Increased price competition and decreased demand also trimmed the margins of China’s WTG manufacturers. Against this backdrop and coupled with continued adverse winter weather, our performance in the first quarter was adversely impacted. Gross margin in the quarter, however, showed moderate improvement compared with the previous quarter, primarily due to a more stable average selling price (“ASP”).

“It is expected that the wind power industry in China will continue to face challenges, with an estimated further reduced newly installed capacity in 2012. Nevertheless, the unusually demanding industry environment may prompt further market consolidation from which we believe we will benefit as a leading market player.

“As the largest non-state owned WTG manufacturer in China and a top ten WTG manufacturer globally, we believe Ming Yang is well-positioned to continue to strengthen its leading market position with a sharp focus on product quality, research and development, innovative business model and cost competitiveness. We are confident that we can capitalize on market opportunities in China and the international markets and retain our competitiveness both during and after this market downturn.”

Mr. Zhang continued: “We are pleased to announce two new appointments which represent our commitment to strengthen the breadth and depth of the management team of the international markets. With Mr. Manfred Loong’s stature and extensive experience with multinationals and our Company, he has been promoted to CEO of Ming Yang International because he is the best candidate to carry out our strategic overseas investments and international expansion initiatives going forward. We are also pleased to welcome Mr. Vincent Pang to our senior management team as our new CFO. Mr. Pang has an impressive background reinforced with extensive finance and accounting expertise, and we look forward to the significant benefits he will bring to Ming Yang.”

Revenue in the first quarter of 2012 was RMB406.6 million (US$64.6 million), representing a decrease of 70.9% from RMB1,397.3 million in the corresponding period of 2011. WTGs for which revenue was recognized amounted to an equivalent wind power project output of 120MW, or 80 units of 1.5MW WTGs, compared to 297MW, or 198 units of 1.5MW WTGs, for the corresponding period in 2011. The decrease in revenue in the first quarter was primarily due to delays in installation and commissioning of 1.5MW WTGs on a number of wind farm projects caused by adverse weather conditions and overall decreased market demand in China.

Selling and distribution expenses were RMB70.3 million (US$11.2 million) for the first quarter of 2012, compared to RMB37.6 million for the corresponding period in 2011, representing an increase of 87.1%. In response to intensified market competition, the Company incurred more marketing and bidding expenses during this period to maintain its order backlog.

Administrative expenses were RMB50.2 million (US$8.0 million) for the first quarter of 2012, compared to RMB54.2 million for the corresponding period in 2011, representing a decrease of 7.3%, primarily due to a decrease in share-based compensation.

Net finance expense was RMB48.2 million (US$7.6 million) for the first quarter of 2012, compared to a net finance income of RMB8.8 million in the corresponding period of 2011. This increase was primarily due to the fees paid to a bank for the arrangement of finance leases for the Company’s customers for the settlement of its trade receivables, and interest of the Company’s RMB-denominated unsecured three-year medium term notes issued in January 2012.

Loss before income tax benefit was RMB126.0 million (US$20.0 million) for the first quarter of 2012, compared to a profit before tax expense of RMB268.2 million in the corresponding period of 2011.

Cash and cash equivalents as of March 31, 2012 were RMB2,282.4 million (US$362.4 million), compared to RMB1,339.5 million as of December 31, 2011. The increase was primarily due to the proceeds received from the issuance of the Company’s RMB-denominated unsecured three-year medium-term notes in January 2012.

New Sales Contracts – During the first quarter of 2012, Ming Yang entered into sales contracts for wind power projects with a total output of 229.5MW, representing 149 units of 1.5MW WTGs and 1 unit of 6.0MW SCD WTG.

Order Backlog – As of March 31, 2012, the Company’s order backlog amounted to 2.2GW. Cumulative signed orders since its inception amounted to 5.2GW.

Orders awarded and pending contract signing amounted to 1.2GW as of March 31, 2012. 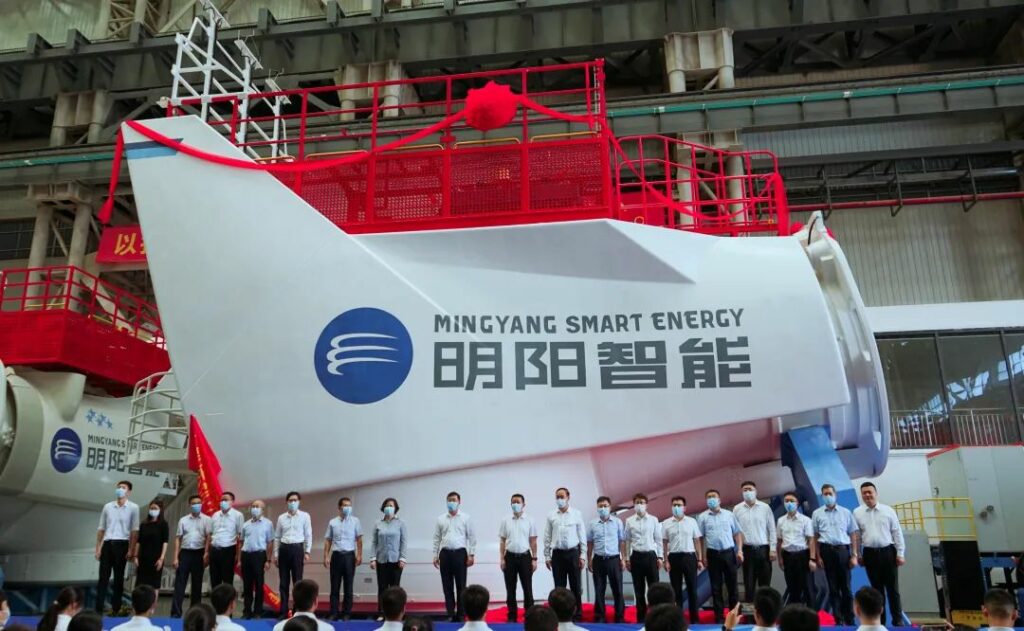