The UK Secretary of State for Business, Energy and Industrial Strategy (BEIS) gave the development consent to the Hornsea Project Three offshore wind farm on 31 December 2020.

Ørsted submitted the development consent order (DCO) application for the 2.4 GW project to the UK Planning Inspectorate on 14 May 2018. The application was accepted for examination on 8 June 2018 and – following a six-month consultation period, examination and consideration – a recommendation was made to the Secretary of State on 2 July 2019.

Since then, Hornsea Project Three has faced several delays in receiving its DCO. The DCO decision deadline had initially been set for 2 October 2019, but was subsequently postponed to 31 March 2020, then to 1 June, and again to 1 July. In July, the Secretary of State set a new deadline for 31 December 2020.

The Planning Inspectorate’s Chief Executive, Sarah Richards, said: “When examining the application and making their Recommendation, the Examining Authority took full account of views from communities, particularly those near the North East coast of England who might be affected by this proposal, alongside national policy and evidence of the need for the project”.

The 2.4 GW offshore wind farm will be built more than 120 kilometres off the north Norfolk coast and comprise up to 300 turbines. If built to full capacity, Hornsea Three could power the average daily needs of over 2 million UK homes.

In January 2020, Ørsted commissioned the 1.2 GW Hornsea One, which then became the world’s largest operational offshore wind farm. Offshore construction on the 1.4 GW Hornsea Two started in October and is scheduled to be completed by 2022. 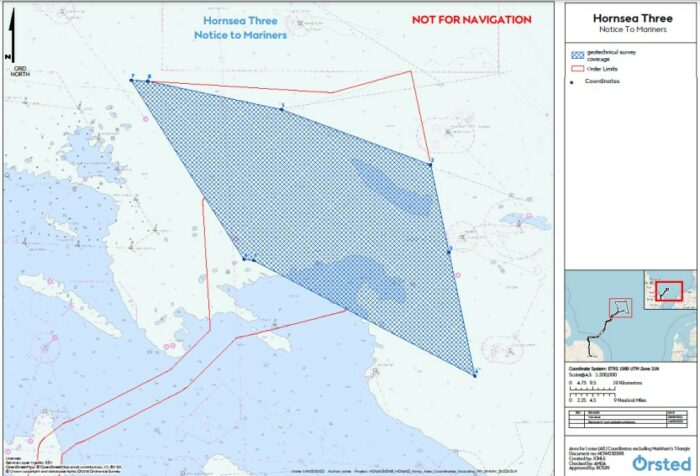 Geotechnical Surveys at Hornsea Three to Begin in April
Posted: 4 months ago
World Days Away from Getting New Biggest Offshore Wind Farm
Posted: 1 day ago
TRIG to Increase Stake in 1.2 GW Hornsea One
Posted: 23 days ago
Advertisement
Partner